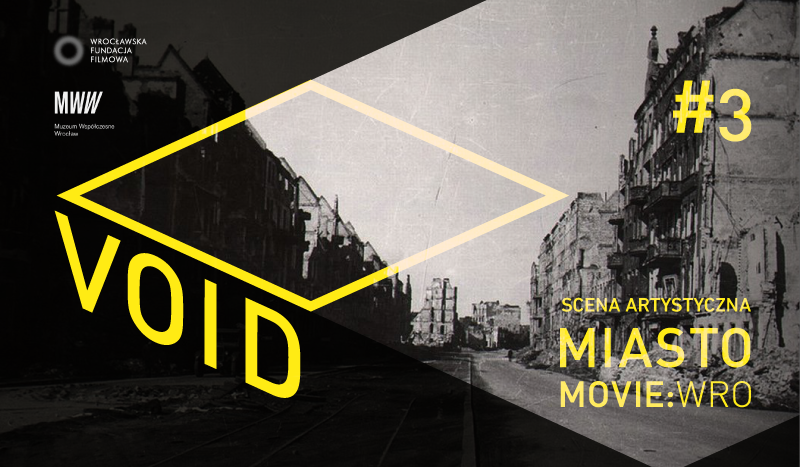 ‘VOID’ explores the concept of urban gaps. It takes on places in Wroclaw whose shape and identity ceased to exist as a result of armed hostilities in 1939-1945. Since then their original functions and context have not been recovered. We will focus neither on historical plans nor on a new architectural form. The leitmotif of the project is the gap – the wasteland – which stretches between a complete concept of Breslau and a finished structure of Wroclaw. We are thus taking a closer look at empty space between what belongs to the past and what has not yet occurred – the places which are neither “there” nor “here”.

Held under the banner of MIASTOmovie: wro, the event ‘VOID’ constitutes a prologue of a few month artistic-exploratory project. A site specific installation, curatorial guided tours and topics raised in April will be subsequently developed into actions revolving around urban gaps. To do so, we invite the city residents to collect and tell their stories associated with “voids”. A series of meetings held in Wroclaw Contemporary Museum will create an opportunity to examine the life cycle of the “void”. We will take on the issue of lost symbolic value, the role of the ruins in the city panorama and the development of – so called – orphaned space. We will talk about unrealized urban concepts and raise the question of what, how, and whether it is worth being reconstructed.

The post-German architectural and urban heritage determines the nature of the today’s city, and the pre-war local plans still indicate the way the space used to be arranged. During the capitulation of Festung Breslau in Wroclaw, gaps in the urban tissue emerged. These empty areas resemble open wounds and serve as a reminder of the war devastation. They also point to the problem of city’s structure reintegration. Scattered around the map of today’s city, the gaps constitute a semantic vacuum – while losing their original function, they still have not gained new meanings. Consequently, such non-places are left abandoned and misunderstood. Devoid of meaning, they are suspended in space and time, not presenting much value to the city. They are pain in the neck for both the residents and the city authorities. The most obvious example of a “place-riddle” is Spoleczny Square. Before war it was known for its quarter development. Today, in spite of numerous competitions for its redevelopment, it is still just an empty gap in the close vicinity of the city centre. There are many more such voids scattered around Wroclaw. Museum Square has nothing to do with a museum anymore. The Silesian Museum of Fine Arts which gave the name to the place, has long been forgotten. John Paul II Square constitutes a very scattered and constantly evolving space. The demolition plans concerning the building of Cuprum and Jozef Babinski hospital’s renovation plans would probably change the character of the area. However, any decision has not been taken yet. The adjacent Solidarity Square known in the past for its “small town square,” functions nowadays as a car park.

These places are marked not only by spatial and functional loss. In many cases they seem to be also affected by the problem of symbolic emptiness. A number of places were swept away from the city map. Many of them used to be city icons – the symbols serving as urban dominants and determining the local identity. Let us take the Silesian Museum of Fine Arts or the Royal Palace as examples. Their demolition was dictated strictly by ideological, rather than technical, reasons. Paradoxically, although these buildings in their original form had no chance to become part of a personal or collective experience of the new users, their absence causes a kind of phantom pain. In many cases, although the architectural composition seems complete, the loss of elements defining the place, resonates till now. This may be applied to Nowy Targ Square where buildings from the 60s face the empty block used to be occupied by the fountain of Neptune. The Partisan Hill is marked by the same incompleteness – it seems, however, that the fall of the tower crowning the complex, overshadowed its whole post-war history.

The consequence of our longings may be seen in our desire to find new points of reference for the city’s post-war identity. In our search of new city icons, we witness ongoing battles for the preservation and conservation of post-war modernism buildings (e.g. Auditorium of Chemistry belonging to the University of Wroclaw) and suggestions to enter the building of SolPol into the list of monuments.

A few months of actions are aimed at tracking the history of Wroclaw’s transformations throughout the last century and at understanding their influence on the public space perception. We would also like to know how the changes affect the way people build relations with the city so marked by its past. Finally, the project analyses the past failures referred to recovering the “voids” and takes the topic of historical reconstruction and the challenges it brings about.